My visit to the FA Trophy final between Wrexham and Bromley brought two other attractions. Well, more actually, as you will see. I arrived at Wembley late on Saturday morning in good time to see the League One play-off between Sunderland and Wycombe Wanderers. Included in my festival of football, Sunday’s non-League finals day started with the FA Vase final between Littlehampton Town and Newport Pagnell Town before the Wrexham-Bromley encounter. I am not sure I have ever seen three games in one weekend.

My route from Kent to London took me through Oxted station, where I spotted the first Sunderland replica shirt. A man in his 40s looked as though he had forced his son and two reluctant daughters to wear red and white stripes for the day. I can only assume he was born in Sunderland and moved darn sarf. I expect his kids would rather be wearing the red and blue shirts of Crystal Palace or Liverpool’s all red. It was time to keep my eyes open for the first Wycombe Wanderers shirt I could see.

Who are QPR playing?

At East Croydon, I changed trains. I saw a man walking toward me in QPR’s colours. I was confused; QPR’s season is dead and buried. As the man got nearer, I stared harder at his shirt. I think I unnerved him slightly. The logo on his shirt revealed the name of a bar in Hong Kong. That explained it. Even more strangely, I boarded the train with a man who looked remarkably like Rodney Marsh. Not many people look like Rodney Marsh anymore, but how 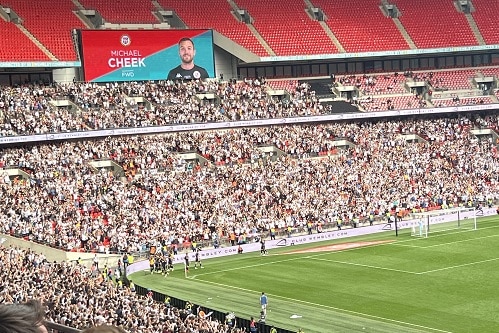 many more QPR connections could there be in one day?

I travelled across London to Euston to catch a train to Wembley. The pubs around Euston were a sea of red and white. Still, no Wycombe Wanderers light and navy blue quarters to be seen. On the train to Wembley, I, at last, spotted the first Wycombe shirt. An elderly gentleman wearing a Wycombe 1991 FA Trophy Final shirt caught my eye. He was with his family of two younger generations. One of the younger ones was explaining to a Sunderland supporter that Grandad played for Wycombe; it was not clear whether he played in the 1991 Final or not. Wycombe Wanderers won the FA Trophy in 1991 and 1993 against Kidderminster Harriers and Runcorn. A man further up the carriage wore a blue and white hooped t-shirt. Creepy.

Entry to the ground was slow for the game. I said to a queuing Wycombe fan that I found it surprising that so many wanted to see next season’s Championship relegation play-off. He didn’t find it funny. The League One play-off was a decent enough game, but Sunderland always looked a notch above their opponents. Wycombe tried to spoil and sit back, and every time they ventured forward, Sunderland picked out the holes in their midfield and defence. The first goal was a powerfully hit shot by Elliot Embleton from just outside the box. If Stockdale in Wycombe’s goal had taken a pace to his left, it would have hit him in the chest. At least, that’s what it looked like to me. With just over ten minutes left, Ross Stewart scored a second, but there was never much doubt which team would win. Adebayo Akinfenwa may look unlike any other footballer, but he showed some neat touches when he came on as a second-half substitute. It was the last appearance for the retiring 40-year-old. Sunderland head to the Championship and QPR next season.

I decided to explore Wembley on Saturday. The Fatburger restaurant near the stadium did not tempt me, despite its name indicating possible associations with the FA Trophy. I found a pub on Wembley High Street which was OK until one of the bar staff, who was taking a break, decided to sit next to me in the outdoor area and puff out cigarette smoke over me. Thanks. I headed for the Malgudi Indian restaurant. Although its name suggests it might be bad and good, it was excellent. I almost had a pint in a Wetherspoons pub on the way back to my hotel until I saw Sunderland supporters standing on furniture and singing. At least, the singing Sunderland supporter at the hotel could only remember the words “Everywhere we go”, which he bellowed over and over again while supping his fourteenth pint.

On Sunday morning, I saw a hashtag on a Newport Pagnell Town top which was something like  #turnwembleytoaseaofgreen. To be fair, there was a good turnout from Newport Pagnell, but ‘sea of green’ was stretching it unless it refers to the pitch itself. But, hardly a sea. That would be water polo. There was also a good number from Littlehampton, but they were much quieter than the green army. When the game took place, a spectacular early strike by Kieran Barnes spurred on Newport Pagnell Town. They went on to win 3-0, which flattered the Newport Pagnell side a little. The turning point came at 2-0 when Littlehampton Town hit the post and had a penalty appeal turned down. They looked hard done by.

In the morning, Charles and Camilla tried to grab the headlines by announcing that they would appear in EastEnders. However, the big event of the day was Wrexham v Bromley. I knew my journey would start at Hashtag United and end at Wembley, but the bits in between were in the lap of the Gods. It 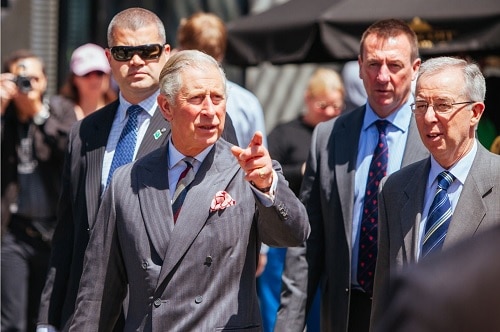 “Does one go this way to the FA Trophy Final?”

was strange that I would be seeing Bromley, a club I followed extensively back in the 1980s when they played in the Isthmian League. However, I was neutral for the final, particularly as I had enjoyed myself so much at the Wrexham-Stockport semi-final.

Before the game, an interviewer outside the stadium was interviewing arriving fans. If they had realised they were appearing on a big screen inside the stadium, I am not sure they would have behaved the same. Wrexham came into the game as solid favourites, with the bookmakers offering longish odds on a Bromley win. In the first period, both sides were cagey, but you always felt that Wrexham had a bit more to offer. A couple of half-chances fell to Wrexham, while Bromley looked dangerous down the wings with no final product. It was no surprise that the score was 0-0 at half-time.

In the second half, Bromley stepped up a gear and started to threaten the Wrexham goal. Simultaneously, Wrexham’s two talented strikers, Ollie Palmer 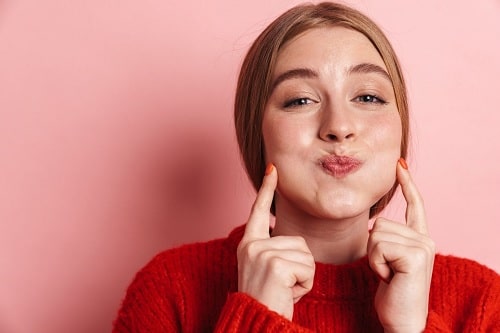 and Paul Mullin, were contained, with Chris Bush outstanding at the heart of Bromley’s defence. A long ball found Connor Whitely, who ran past the Wrexham defence before pulling the ball back for Michael Cheek to guide home for a 1-0 lead. Cheek wheeled towards the ecstatic Bromley fans. Wrexham huffed and puffed, but Bromley looked in control for the rest of the game. There was a late scare for Bromley when the referee ruled out a Wrexham goal for offside in stoppage time. On balance, Bromley deserved their win.

Hashtag United only needed to win eleven ties, and they could have been holding the FA Trophy aloft on Sunday. However, Bromley were worthy winners. Wrexham will need to get back to winning ways to reach the Football League via the play-offs. They have a semi-final next weekend against Grimsby Town. I shared a few beers with the Wrexham fans staying in my hotel on Sunday night. They were a decent bunch of fans, although I didn’t need an extra beer that a generous Wrexham fan bought me as I was about to head to bed. That pint meant that it was all over for me for the day.