On Friday, my journey through London was easier than usual as many had rallied to Boris’s call to work from home. Each FA Trophy game bar one on my trail from Hashtag United to Wembley has meant that I have travelled from Kent to Central London and across the Thames en route to Essex, Buckinghamshire, or Hertfordshire. (See my journey so far) After two games at Bishop’s Stortford, I am back in Hertfordshire to witness Cheshunt vs Bishop’s Stortford. London was quiet as companies responded to Boris’s call for employees to work from home. As I crossed London Bridge on foot, I passed an empty London Sightseeing Bus before entering Liverpool Street Station with a mask. I still don’t understand why my glasses sometimes steam up wearing a mask and at other times don’t. I also didn’t understand why a tourist took a selfie with The Shard in the background, shrouded in mist.

Bishop’s Stortford might have a richer FA Trophy history than Cheshunt, but they can’t claim to have Cliff Richard, Victoria Beckham, and Laura Trott as celebrities from their town. Sir Cliff and Laura grew up in the town, while Victoria Beckham went to school there. Bishop’s Stortford simply doesn’t have these claims unless you put Russell Brand, who attended college in Stortford, higher than the Cheshunt superstars. The local sports centre is named after the highly talented Laura Trott, although there is nothing to celebrate Cliff’s star status.

To Theobalds Grove (sort of Cheshunt)

My train journey from Liverpool Street to Theobalds Grove, the nearer station to Cheshunt FC’s ground and my hotel, is dominated by a woman who joins the train just as it is about to depart. She homed in on a woman sitting alone like a guided missile. By the time the train had reached Seven Sisters, I swear that I knew more about her life than people I have known for 20 years or more. And, in case you wondered, she was around when London was bombed in the war and never moaned, yet youngsters today moan if the internet is a bit slow. Actually, my internet is a bit slow today, which is seriously annoying me. Like me, she is the youngest in her family, but similarities seemed to end there.

How much does a Roman… jokes

As I walked from Theobalds Grove, I saw a sign for Cheshunt, informing me that the town is twinned with Stains (France), an unfortunate choice, I would say. There are a few pubs on the way to the centre of Cheshunt. It’s hard to stop yourself thinking of the old joke ‘how much does a Grecian earn?’ as I passed The Roman Urn, which offered a slight twist. Further up the road, I passed the Old English Gentleman pub, but, much as I would like to enter, it clearly stated that ‘Regulars only’ can come in. How do you become a regular if you can’t get in?

I’ve been here before

I decided to keep an eye open for an Indian restaurant for a Friday night curry. I came to the Déjà vu Tandoori and peered through the window. On the tables, I could just about read the typical Indian menus. The white cloths on the tables looked like tables in many other Indian restaurants. In fact, the restaurant seemed quite familiar to me. I felt as though I had been there before.

As it was starting to get dark, I headed back towards Theobalds Grove Station and onwards to the comfort of the Travelodge where I was staying. I 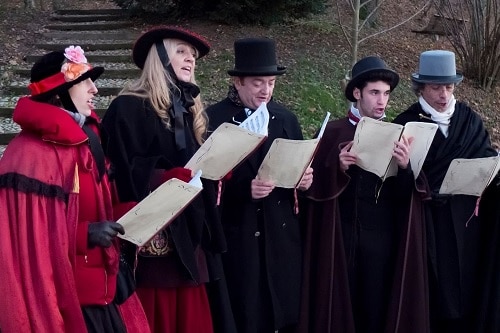 suddenly realised that there had been a subdued atmosphere all day. No choirs were singing Christmas carols at any stations; there was no Christmassy music by Status Quo coming from shops. A house decked in lights with snowmen outside had a neon sign showing ‘Anta stop here’. Let’s hope Santa makes allowances for those kids.

On Saturday morning, I woke early, ready for the day ahead. I took a walk along the River Lea, which curiously runs through the Lee (not Lea) Valley, but I set off for the ground with plenty of time for a pre-match pint. I quickly learnt that Cheshunt is pronounced as Chezunt; it had never really crossed my mind before. I recalled games between Charlton’s ‘A’ team and Cheshunt from when I was a young man chatting Jim Tuite, Cheshunt’s memory-man and historian and a visitor to several million football grounds.

The game pitched together two teams in excellent form. Cheshunt had gone 14 games undefeated and Bishop’s Stortford 15. From the first minute of the game, it looked like it would be a tight game. I passed a comment to another spectator early on that I thought one goal might be enough to decide the game. Frankie Merrifield had a header easily saved by Cheshunt’s keeper, George Marsh, in the first half and a battling run by Cheshunt’s Zack Newton gave Rowan Liburd a half-chance that was well saved by the visitor’s keeper, Jack Giddens. But, chances were few and far between as defences dominated in the defences.

In the second half, it was more of the same. Any chances were barely half-chances. Barely, quarter-chances. A hanging cross fell loose with Marsh under pressure, but it needed Glenn Hoddle (did I tell you he lived in Cheshunt too?) in his prime to volley in the eighth-chance. Bishop’s Stortford had a couple of shouts for penalties, but I wasn’t convinced from my distant vantage point, and, more importantly, Mr Mackey, the referee, was unconvinced from his.

Bishop’s Stortford started to get on top in the middle period of the second half but rarely threatened to score. You felt that 0-0 and penalties were inevitable. And that’s how it ended. It appeared that Bishop’s Stortford chose to take penalties at the end their fans were standing, but it didn’t seem to put the Cheshunt players off. Bishop’s Stortford’s Jonny Giles, who generally has a particularly good touch, hit the bar with Bishop Stortford’s third penalty, and George Marsh dived to save the fifth Stortford penalty. In between, Cheshunt scored all four penalties without any misses. As I walked back to the bar for a post-match pint, I heard a young lad ask his Dad why Cheshunt didn’t take their fifth penalty as they could have beaten Bishop’s Stortford 5-3 on penalties rather than (just) 4-3. I think it might have taken some time to get the celebrating Cheshunt players back to take another penalty. I had witnessed Cheshunt’s first FA Trophy 3rd Round Proper victory.