It’s not often that I’ve moaned in this column, but I feel swindled. Having seen Cheshunt in the FA Trophy three times this season, I witnessed their win over Bishop’s Stortford to qualify for the Isthmian Premier play-offs. Having won their semi-final, I tried to get a ticket for the final at Hornchurch. As I was away on holiday, I missed the first release of tickets online, but the Hornchurch website informed me that there would be 500 tickets available on the day. Except that it is, they changed their mind and sold out in a second release of tickets online. Sadly, I didn’t see 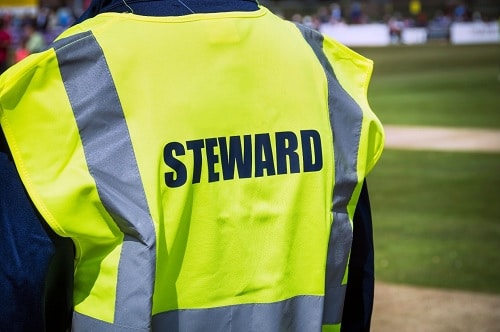 The Urchins of Hornchurch face the mighty Ambers of Cheshunt. The result was a 2-1 win for Cheshunt, which means they will be competing in the National South next season.

Following on from this, I remember going to watch Ebbsfleet United play Luton Town in the National League about ten years ago. As I approached the turnstile, a woman in a hi-vis jacket, which had the words ‘Very Officious’ on her bib, stopped me. Actually, it may have said ‘Official’; I forget. “Home or away supporter?” she barked at me. “Neutral”, I replied. “Away end”, she replied sharply, pointing at the away supporters’ entrance. I protested and said that I was much more a home supporter than an away supporter, explaining that I lived 15 miles away. To help understand her command, she spoke louder and more slowly, pronouncing each syllable with greater definition while still pointing. “A-way end turn-stile”, she commanded.

Reasoning with a steward

After looking angry, I tried the friendly approach. I explained that I occasionally watched Ebbsfleet but as a neutral. I said that I understood her reasons for ensuring safe segregation of supporters etc. and that she had to do her job properly. It almost worked. “If you support Ebbsfleet sometimes, who plays in goal?” she asked. I was suddenly on Who Wants To Be A Millionaire? having to answer the final question. I could picture the chap that plays in goal but frustratingly could not get his name. Instead, I named three random Ebbsfleet that came to mind. “Away end”, she repeated, having failed the test. I reacted badly, I admit. “Stuff this game”, I said and walked away from the turnstiles, muttering things like “if you don’t want my custom”. She was unflappable too.

The car was parked no more than 200 yards away, so I hatched what Baldrick would call a cunning plan. There was a hat in the car, and a felt tip pen. I drew a moustache on my face, took off my spectacles, zipped up my jacket to hide my red jumper and set off back to the ground. I walked back to the turnstile

where Ms Officious was patrolling. As I approached, I drifted nearer to her colleague, a fresh-faced young man, who gently asked if I was “home or away”. I gently replied “home” and entered the ground. Side on, as I passed Ms Officious, I am sure she half-recognised me, but it was too late. I had my foot inside the entrance to the turnstile and was in the home end. Actually, the bit about the moustache wasn’t true, but I trust you worked that out. Anyhow, to be fair, I have always found Ebbsfleet to be a friendly club since that event, so good luck to them in the National South play-offs.

Getting into a cricket match car park

I tried to park my car at a County Cricket game some years ago. As I approached the entrance, I saw an empty area in the car park. A steward came running over to me. “Sorry, Sir, this is disabled parking only. You need an invalid permit for here”, he said. A large area for disabled parking was empty, and I was about to remonstrate. Instead, humour saved me. I pulled an expired membership card out of my wallet and showed it to the steward. “That’s not a disabled permit, Sir”, he correctly observed. “Yes, I know”, I replied, “it’s an invalid permit because it’s out of date”. He hesitated for a moment, then laughed and let me in.

When I witnessed Wrexham defeat Stockport County in the FA Trophy Semi-Final, Stockport fans could take consolation from being comfortably above Wrexham at the top of the National League. How things change. Stockport County appear to be choking, while Wrexham are keeping their form going. The game on Sunday 8th May at Wrexham’s Racecourse Ground between the two clubs now looks like an even more important game than it appeared a few weeks ago. Wrexham could still do the double of automatic promotion to the Football League and the FA Trophy.

Rolling Stones and Heed heading up

There are just under three weeks before the FA Trophy Final at Wembley when Wrexham play Bromley. There will be much more on this game in the next two editions of the Weekly Review. Stay tuned.