Chips win again – this time on penalties at Aylesbury

My route to Wembley via Aylesbury or Chesham?

My Wembley trail, which started at Hashtag United, took me to the tie between Aylesbury United vs Chipstead in the 2nd Round Qualifying of the FA Trophy. As my plan is to soak up the local atmosphere of each home team’s locale, I had the dilemma of choosing between Aylesbury or Chesham. Why? Because 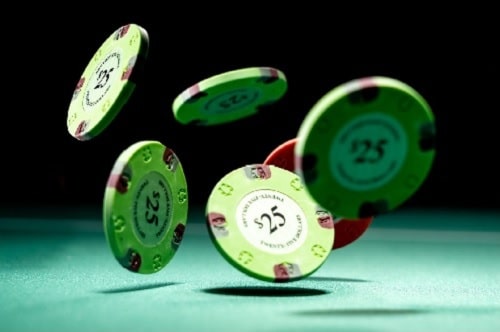 Aylesbury lost their home ground in 2006 and have groundshared at various places since then, moving to Chesham United’s Meadow View Park in 2017. It’s a pleasant location, but Chesham is over 13 miles from Aylesbury. I decided that I had to explore both Aylesbury and Chesham.

Two men joined the train seconds before it departed Marylebone for Aylesbury. The taller man had one of those overly smiley faces. After each sentence, a big false smile appeared on his face. He reminded me of those gangsters in films who smile as they threaten someone with violence. The shorter man spoke in growly tones. He seems to come from an American gangster movie where I find myself turning up the volume on my television but still cannot hear a word. They talked about sport mostly, with both making short, sharp phone calls to associates from time to time. Smiley Face looked severe when on the phone but came back with a big, exaggerated grin after the call ended. There was a financial disagreement on one call. Besides the over-the-top smile, there was a false laugh when Mr Smile told Mr Growly that someone they both knew had asked him for a job. “Not bloody likely”, he said amid guffawing false laughter. “Is the Pope a Catholic?” replied Mr Growly. I was not sure what he meant.

At Rickmansworth, they departed. I’m left to look out of the window at the rolling, and sometimes steep, hills of the Chilterns. On arriving at Aylesbury, 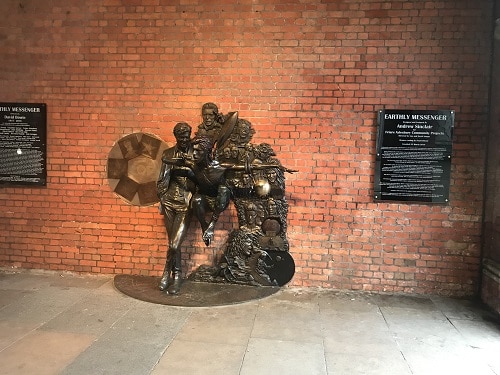 David Bowie hiding round a corner from Disraeli

the walk to my hotel took me past Benjamin Disraeli, David Bowie and Ronnie Barker. Statues thereof, I mean. I didn’t know that David Bowie first performed Ziggy Stardust at Friars, Aylesbury and I didn’t know that Ronnie Barker started at Aylesbury Repertory as a young man. It’s a busy town centre with a market square, offering everything you might want and plenty of things you don’t want.

Sad journey to the former home of Aylesbury United

After checking in at my hotel, I made the pilgrimage to Aylesbury United’s former ground at Buckingham Road. In 2006, they had to leave. Since then, property developers have unsuccessfully applied to use the land for housing. I managed to get access to part of the old ground down a path through some

trees. The place is overgrown, but the floodlights and stands are still standing, if only just. Nature has reclaimed the land over those 15 years. I genuinely hope the supporters’ wishes of #BringTheDucksHome come true. 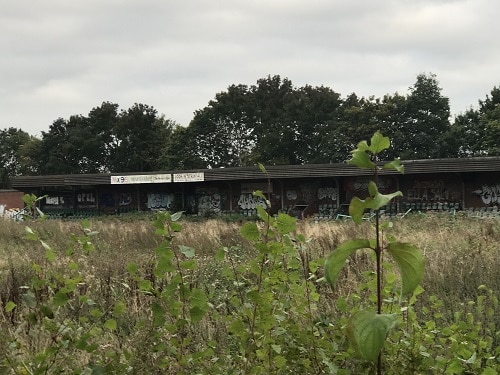 In the afternoon, I had a quick pint at the King’s Head, an ancient pub with a courtyard. In the 25 minutes that I spent there, I helped a group remember the name of comics from my childhood. This topic moved on swiftly and with much hilarity to people with funny names. I wasn’t expecting mid-afternoon hysteria. In the evening, I enjoyed a couple of pints at The Rockwood, where a very helpful lady advised me on which bitter would suit my palate best from my brief; she made a good choice. Later, she chose a glass of wine wisely for my nightcap.

Saturday morning, I headed back towards London for five stops to change to the underground at Chalfont & Latimer for the single stop to Chesham. I learnt that the underground is more than 50% overground and that Chalfont & Latimer to Chesham is the longest stretch between two stations on the entire Tube network. It seems strange leaving the tube at both a terminus and one in the middle of a rural area.

I arrived in Chesham and walked into the heart of a busy market. I reckon you could find anything in this market. There was a genuine joie de vivre about the place. I felt as though I had walked into a private party. I retired to Neros for a short break and returned to even greater festivities in the opposite direction. It was only then that I realised it was Chesham’s Hat Festival. It explained why some people were wearing ridiculous headgear. I think the festival is called Hats Off even though it was more Hats On. There was music, plate spinners, a design-your-own-hat – sadly, for children only – and much more.

By 2.15 pm, I arrived at Meadow View Park, the home of Chesham United and Aylesbury United. As I passed through the turnstile, two gentlemen greeted me, selling Aylesbury hats, scarves, shirts, badges; you name it. They asked which team I supported. When I said neither, they worked out with an impressive speed that I must be @fatrophyhound. We discussed the hopes of Aylesbury returning home, but it seems as though it is a long way off.

The game was mainly even from start to finish, with both sides having brief periods of being in the ascendancy. If anything, Aylesbury United looked more 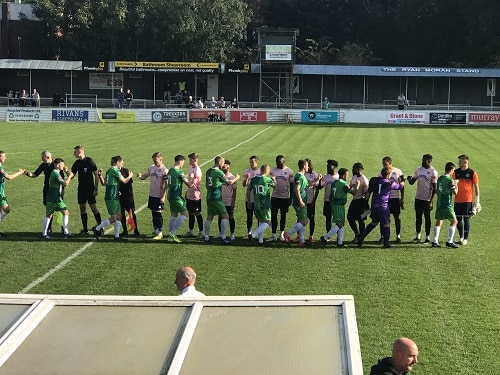 likely to score in the early stages. Indeed, they had the perfect opportunity when Max Hercules got inside the Chipstead full-back and was adjudged to have pulled down the dangerous winger. Hercules got up to take the kick, but Matt Kerbey saved well. After 22 minutes, Andy Kabuikusomo ran at the Ducks’ defence dangerously. The ball briefly broke loose, but Kabuikusomo turned and hit a well-struck shot from the edge of the box into the corner of the goal. Half chances fell at both ends, but Chipstead remained in front at the break.

Early in the second half, Aylesbury got the goal back. Two quick passes on the edge of the penalty area released Sonny French, who slotted home to make it 1-1. Like the first half, half-chances came at both ends, but penalties looked more and more likely as the game wore on. The first four penalties were all converted, but Chipstead were the first to miss. Aylesbury United missed their next two, though, with one producing an outstanding save by Matt Kerbey. The second miss by Aylesbury United left the leading goalscorer, Tom Collins, needing to keep a cool head to make it 4-2 and a place in the 3rd Round Qualifying. Collins made no mistake. After the harrowing experience of watching England lose to Italy on penalties recently, I realised watching penalties is rather enjoyable when you are impartial. The Chipstead fans jumped up and down; the home supporters trudged off with their heads bowed. Where next for The Chips?